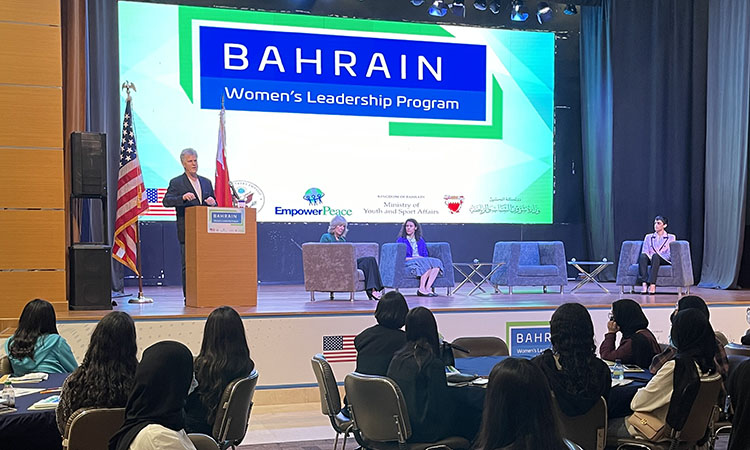 In cooperation with the U.S. Embassy in Bahrain, the Ministry of Youth and Sports Affairs organized the Bahraini Women’s Leadership Program (BWLP), which aims to shed light on the leading Bahraini women in many fields, and to present Bahraini models in addition to sharing the Kingdom of Bahrain’s and the United States’ experience in empowering women.  It also shows women’s roles in the development process, which the Kingdom is witnessing in various domains.

The activities of the four-day program were launched with the participation of 46 emerging women leaders (aged 15-18). During the program, several workshops will be held in which speakers from some of the most prestigious colleges and organizations in Bahrain and the United States will speak. In addition, speakers representing private, governmental, and non-profit organizations will lead workshops and discuss building skills, including leadership and negotiations skills, social media, public speaking, and women in government.

A speech will be delivered over the course of the program entitled Advances in Gender Equality and a number of panel discussions will be held entitled, Women and Government, Bahraini Women Making Change and Building your dream: Life of an Entrepreneur.  The program’s workshops will organize discussions on a number of topics related to skills building and personal development, The Leader in you, The Basics of Public Speaking, Art of negotiation, Battling the imposter syndrome, The Art of Difficult Discussion and Establishing your personal Brand and network using social media.