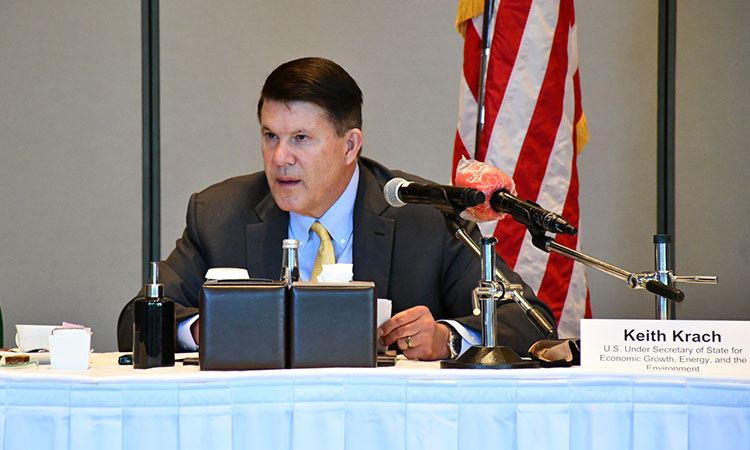 Hello everyone. It’s great to be here in the Kingdom of Bahrain.

Your country has certainly been making the news recently with its visionary leadership. Bahrain’s signing of the historic Abraham Accords Declaration and agreement to normalize relations with Israel represented brave steps towards a secure, stable, and prosperous Middle East.

We also applaud Bahrain for your leadership in promoting religion freedom. The agreement signed just days ago with the King Hamad Global Center for Peaceful Coexistence is an example to the region and the world on fighting the scourge of Antisemitism. Teaching our children the value of peaceful coexistence is a noble cause the United States shares with your country.

Bahrain has been, and continues to be, America’s important strategic partner here in the Gulf, maintaining stability and ensuring the free flow of commerce. The United States remains committed to Bahrain’s security and to our deep and effective partnerships to counter threats to the region, especially from Iran, the world’s top sponsor of terrorism.

There’s another threat the world is facing, and that’s from China.

You’ve seen many examples of the Chinese Communist Party’s predatory practices in their One Belt One Road rampage across the region. I’ve head it called the One Belt One Way Toll Road to Beijing, because it’s a one-way street. The CCP is not interested in partnering with Bahraini or any other companies. It wants to put them out of business.

And in the area of 5G, the CCP is a serious threat to Bahrain’s sovereignty and national security. That’s why I’m here—to talk to the government officials and business leaders about the importance of getting 5G security right.

The United States and more than 40 countries and 60 telecommunications companies, as well as tech giants like Oracle, Cisco, HP, Verizon, Telefonica, Futjitsu, and so many others, are getting 5G right by joining the Clean Network.

27 NATO countries and 25 EU countries are now part of the Clean Network.

Yesterday was a big day. Bulgaria, Slovakia, North Macedonia, and Kosovo all signed 5G agreements with the United States making them all members of the Clean Network. 4 in 1 day! That must be a record.

So what is the Clean Network? It’s a coalition of like-minded countries and companies committed to securing their most sensitive information from malign actors—like the Chinese Communist Party—based on internationally-accepted digital trust standards.

The Clean Network fits well with the Kingdom of Bahrain‘s vision of a vibrant, forward-looking Middle East. The Middle East of tomorrow should be built on trusted 5G infrastructure. Bahrain can continue to lead the way by joining the Clean Network.

Now, I’d be happy to take your questions.