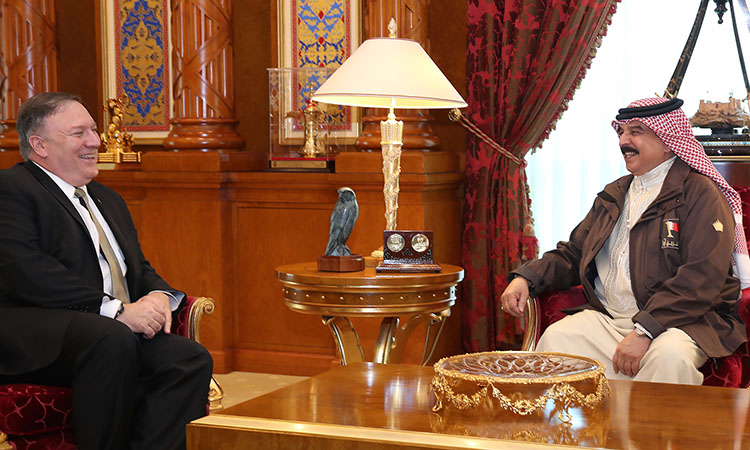 U.S. Secretary of State Mike Pompeo visited Bahrain on January 11, 2019, as part of a regional tour in the Middle East. The Secretary met with King Hamad bin Isa Al Khalifa, Crown Prince Salman bin Hamad Al Khalifa, and Foreign Minister Khalid bin Ahmed Al Khalifa in Manama. The Secretary thanked the King, the Crown Prince, and the Foreign Minister for Bahrain’s continued friendship and strategic partnership with the United States.  The leaders addressed critical priorities, including counterterrorism, Yemen, and countering the Iranian regime’s dangerous activities.  The leaders agreed on the importance of all parties continuing to work with UN Special Envoy Martin Griffiths toward a comprehensive political solution to the conflict in Yemen.  The leaders also discussed Bahrain’s support for religious coexistence and freedom of religion, and the conclusion of parliamentary elections including the election of the first female Speaker of the Council of Representatives. The leaders discussed realizing the Middle East Strategic Alliance, anchored by a united Gulf Cooperation Council, to stand against the Iranian regime’s malign influence and advance the prosperity, security, and stability of the region.  The Secretary expressed his gratitude for the role Bahrain plays, particularly through hosting the United States Fifth Fleet, and in supporting a variety of regional priorities.