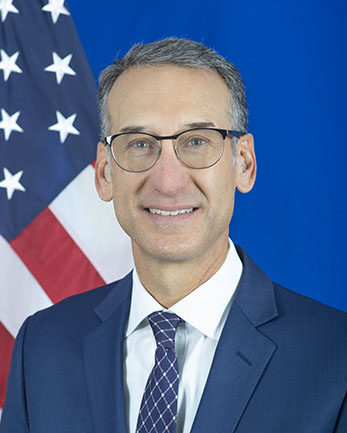 Steven C. Bondy was nominated by President Biden to serve as the U.S. Ambassador to the Kingdom of Bahrain in April 2021 and confirmed by the Senate in December 2021. Previously, he was Chargé d’Affaires and Deputy Chief of Mission at the U.S. Embassy in the United Arab Emirates for the period 2017-2020. He arrived in Abu Dhabi following a tour as Assistant Chief of Mission at the U.S. Embassy in Kabul, Afghanistan in 2016-2017. From 2013 to 2016, Mr. Bondy served as the Foreign Policy Advisor to the Commanding General of the U.S. Joint Special Operations Command. Prior to that, he was the Director for Arabian Peninsula Affairs at the State Department. He also served in Baghdad, Iraq in 2009-2010, where he was the co-director and sole civilian agency representative in the Force Strategic Engagement Cell. He previously served at the U.S. Embassy in Bahrain as the Political/Economic Counselor in 2004-2007.

Throughout his career, Mr. Bondy has focused on the countries and issues of the broader Middle East region. Other overseas assignments include tours at the U.S. embassies in Egypt (2000-2004), Jordan (1994-96), and Turkey (1992-94). In Washington, he served as Director for Terrorism Finance and Economic Sanctions Policy, Lebanon desk officer, and at the State Department’s 24-hour Operations Center. He joined the State Department in 1991 after five years in the private sector.

Mr. Bondy is a native of New Jersey, with Bachelor’s and Master’s degrees from the University of Delaware. He speaks Arabic and French and has studied Farsi, Turkish, and Spanish. Mr. Bondy and his wife Meghan are the proud parents of a daughter and son.