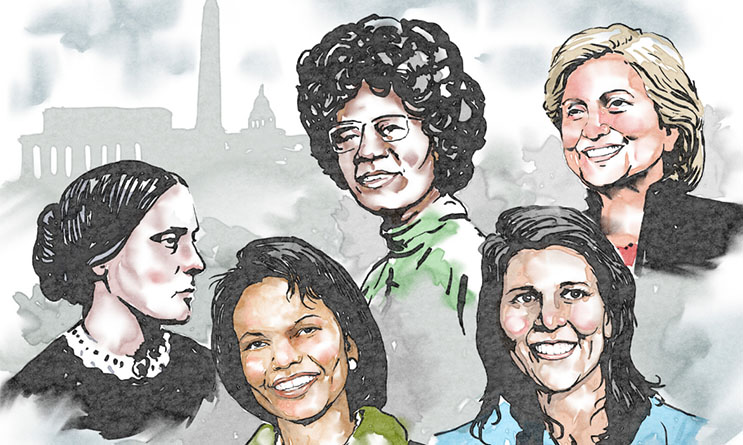 U.S. Chargé d’affaires to the Kingdom of Bahrain

Every March, the United States Embassy in Bahrain, like many of our embassies throughout the world, celebrates Women’s History Month. Women and girls across the globe have always had an influence on politics, education, art, economics, family life, and law, as key advocates for the advancement and protection of all people. They play an important role in shaping both the present and the future, and recognizing their influence throughout the past is key to understanding our shared history. Throughout the month, we will mark this special occasion by recognizing some of the achievements made by remarkable female trailblazers.

In the United States, women continue to shatter glass ceilings and advance into professions and roles which were, not so long ago, thought to be the exclusive domain of men. In 2020, we saw the election of the first female Vice President by the largest number of votes in any American election, as well as the highest percentage ever of female representatives in the U.S. Congress and we witnessed the first woman take command of a U.S. Navy aircraft carrier. Furthermore, at the U.S. Embassy Bahrain, three out of five State Department sections are headed by women, not to mention the Acting Deputy Chief of Mission and myself.

Bahrain also serves as a role model for women’s accomplishments. Bahrain has led the region in advocating for women’s access to education, protection under the law, and representation in all sectors. Under the leadership of First Lady Princess Sabeeka bint Ibrahim Al-Khalifa, the Supreme Council for Women has supported the advancement of women and girls across all segments of society. Her leadership and commitment to these efforts are recognized across Bahrain, with its culture of openness and inclusion, and the increasing prominence of women making history in multiple sectors, while sustaining traditions unique to Bahrain.

Our Embassy has been privileged to interact and partner with a wide range of pioneering Bahraini women who help shape the U.S.-Bahraini partnership. From Fawzia Zainal, Bahrain’s first female speaker of the Council of Representatives, to the first woman to be appointed as the Ministry of Foreign Affairs Under Secretary Dr. Shaikha Rana bint Isa bin Daij Al-Khalifa, to Shaikha Mai Al-Khalifa who leads the Bahrain Authority on Culture and Antiquities with vision, understanding that culture and the arts impact all sectors of a society, to Ahlam Janahi, president of the Bahrain Businesswoman’s Society, who has advocated for new enterprises that launched Bahraini women into exciting new fields, from information technology to microfinance. The list goes on and on with the extensive examples of leadership, innovation, and talent represented in the women of Bahrain.

I am particularly inspired by the can-do spirit and innovative talents of Bahrain’s young women. Through our many Embassy sponsored exchange programs we have been honored to work with amazing Bahraini women. For example, one participant, Dr. Sara al Reefy, founded a breast cancer treatment center, which has increased awareness and saved thousands of lives. Another, Fulbright scholar Amal Al Saffar, inspired us all as the first Bahraini woman to climb Mount Kilimanjaro and visit Antarctica. Meanwhile women are playing a crucial role in Bahrain’s thriving art scene. The Embassy has been proud to display works by outstanding artists like Balqees Fakhro, whose works have also been featured at Sotheby’s and the Paris Biennale, and Nabeela Al-Khayer who has captured images from the everyday life of Bahraini women since her first solo exhibit in 2002.

The depth of contributions by American and Bahraini women could not possibly be reflected in this brief article, but that in itself speaks volumes to the rich and impactful history of women in both the United States and Bahrain and is reflected in the long and rich friendship between our countries.