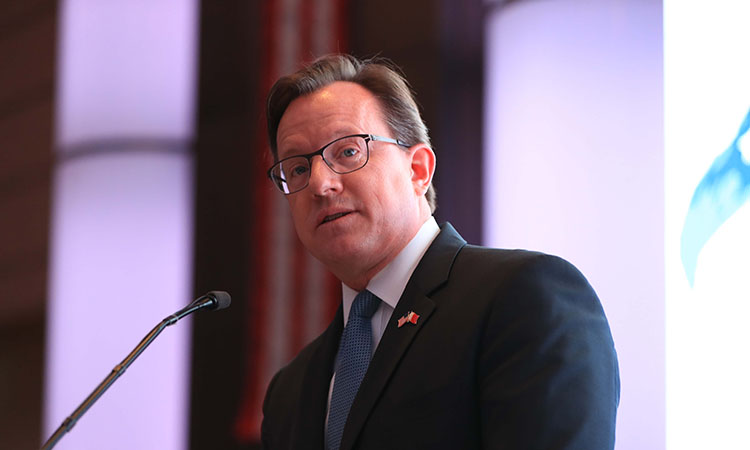 U.S. Ambassador to the Kingdom of Bahrain

On Thursday at the United States Department of State, U.S. Secretary of State Michael R. Pompeo released the 2018 Trafficking in Persons (TIP) Report, an annual publication documenting the efforts of 187 governments in combating human trafficking.

Human trafficking, also known as trafficking in persons or modern slavery, is a crime of exploitation in which a trafficker compels an individual into service for commercial sex or labor or both using a number of coercive or deceptive practices to keep their victims from speaking out or asking for help.  There are an estimated 25 million victims of human trafficking throughout the world, trapped in a multi-billion dollar industry that weakens the rule of law and strengthens criminal networks.

For the first time, Bahrain received a Tier 1 ranking in the 2018 TIP report.  Bahrain is the first country in the GCC to have been recognized in this way.  The ranking is based on measures Bahrain has implemented to combat human trafficking consistent with standards identified in the U.S. Trafficking Victim’s Protection Act (TVPA).  The TVPA outlines clear, measurable, and effective steps that a government can take to mitigate the prospect of a person becoming a trafficking victim, by ensuring prosecution of traffickers, protection of victims, and prevention through promoting awareness of trafficking.

Bahrain was recognized for its clear and bold leadership on these issues, reflecting a commitment to protect vulnerable workers and to ensure that Bahrain’s labor market contributes soundly and effectively to an ambitious economic strategy that has made Bahrain the fastest-growing economy in the GCC.  In 2015, Bahrain opened an internationally renowned shelter for vulnerable workers and trafficking victims.  I recently had the opportunity to visit the shelter, where I met with staff members and a number of expatriate workers receiving protection and assistance from the Government of Bahrain to resolve outstanding issues.

Earlier this year, Bahrain launched a Trafficking Victim’s Assistance Fund to provide financial assistance to any individual declared as a trafficking victim by the Public Prosecutor’s Office.  This fund ensures that trafficking victims do not suffer financial hardship in addition to the traumatic experience they have already endured at the hands of their traffickers.  Bahrain has improved coordination across government agencies by implementing a standard-setting National Referral Mechanism for Victims of Trafficking in Persons consistent with its commitment to a victim and worker-centered approach to addressing potential trafficking crimes.  Crucially, Bahraini prosecutors have won convictions in several trafficking-related court cases.

At Thursday’s TIP report release ceremony, Secretary Pompeo also recognized Mr. Ausamah Al Absi for his extraordinary leadership as Chairman of Bahrain’s National Committee to Combat Trafficking in Persons (NCCTIP).  Mr. Al Absi, who is also the Director of the Labor Market Regulatory Authority (LMRA), was honored as a “TIP Hero” – one of only ten individuals recognized in this way worldwide.  During Mr. Al Absi’s tenure as the NCCTIP Chairman, Bahrain has driven forward its program of reforms and collaborated extensively with both the United Nations’ Office of Drugs and Crime, as well as with the International Organization for Migration to develop new institutions and practices to address the most vulnerable members of society.

National governments bear the primary responsibility in combating human trafficking, but they cannot do it alone.  The 2018 TIP Report highlights the importance of local communities in safeguarding the places they call home from the insidious effects of human trafficking.  It encourages national governments to support and empower those closest to the problem as they face the challenges and consequences of modern slavery.

The impetus for community-based action can come from any number of sources—a concerned local official, an NGO raising the alarm, law enforcement investigating the crime, or an individual who simply wants to be a part of the solution.  Once support has been garnered, there are several important steps a community can take to bolster its response.

First, it is important that communities build multi-stakeholder partnerships among all levels of government from the national to the local and between law enforcement, service providers, survivors of human trafficking, and other key community actors.  Creating a task force may be one of the best ways to ensure coordination among the many facets of a comprehensive anti-trafficking strategy.

Second, communities, with support from their national governments, can conduct an assessment to help better understand who may be most vulnerable to human trafficking, what services currently exist, and what gaps need to be addressed.

Third, targeted training and awareness-raising efforts for those who may come into contact with victims of human trafficking are critical to a local response.  Professionals, and especially those likely to interact with victims such as doctors, teachers, judicial officials, law enforcement officers, and business-owners, should be trained to recognize the indicators of human trafficking and know how to seek assistance.  In addition, community-based organizations such as women’s, immigrant advocacy, and religious groups are well-placed to raise awareness among their members, who are often the eyes and ears of their communities.

Fourth, communities can develop processes and protocols that ensure victims are proactively identified and provided with comprehensive emergency, short-, and long-term care.  Such a protocol can help to leverage resources and expertise, create standards for a victim-centered and trauma-informed approach, and be a conduit for sharing information.

Ultimately, the message of this year’s report speaks to the power of local knowledge and the strength of community ties.  Modern slavery is a reality in every region and country of the world.  But we can all find ways to contribute to the solution.  In doing so, we all take steps to end human trafficking.

The U.S. Government is very supportive of the efforts underway in Bahrain to address worker vulnerability and combat human trafficking.   On behalf of my government, I express my appreciation for the leadership of the Government of Bahrain on these vital issues and look forward to deepening our partnership in the months and years to come.