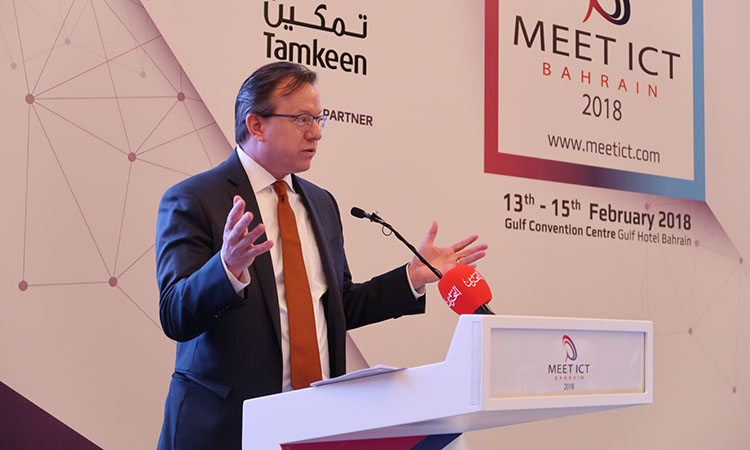 Congratulations to the Minister and to the organizers of MEET ICT and BITEX for again bringing together many top businesses and ICT professionals in this forum to discuss, embrace, and build upon Bahrain’s remarkable digital transformation.  I am proud to take part in today’s opening ceremony, which coincides with Discover America Week.  Discover America Week is an annual U.S. Embassy initiative that highlights the presence and contributions of U.S. companies in Bahrain.

As we highlight American businesses in Bahrain this week, there is no better industry to cite than the tech industry.  Fifteen of the world’s twenty-five largest tech companies are based in the United States.  For many around the world, the tech industry is synonymous with Silicon Valley, and as a Californian who grew up in the 1970s and 1980s as the personal computing revolution occurred, I agree.  But the tech industry in America reaches well beyond Silicon Valley.  In American cities as diverse as Austin, Texas and Boston, Massachusetts, our unparalleled university system, access to capital, and entrepreneurial spirit have made the United States the center of global technology.

Other U.S. firms have made similarly important contributions to Bahrain and the region’s ICT landscape, such as Dell, and Sabre Systems, to name just two of them.  Other firms will be making important new contributions.  Amazon Web Services announced last fall its plans to build three new data centers in Bahrain, making this country its regional cloud computing hub.

And Avaya recently opened an office in Bahrain to service clients here and in other countries in the region.  Meanwhile, the services and products of other U.S. ICT firms are ubiquitous in Bahrain, such as Google, Apple, Hewlett Packard, IBM, Ciena, and Intel, to name just a few.

U.S. technology products are reliable, supported and scalable to any size of business.  The U.S. tech sector has developed in an environment of rigorous competition, strong financial backing and unparalleled protection of intellectual property and creativity.  The reliability and support clients receive from U.S. technology companies is unequaled, and is a signature feature of the industry in the United States.  U.S. firms are also at the leading edge of new computing technology, including in artificial intelligence, robotics, cloud computing and fintech, as well as in protecting data integrity and cyber security tools.  We understand that when customers and companies look for technology solutions they have choices, but I would submit that across the board, U.S. technology companies set the standard for performance and reliability, and we are therefore pleased to have the opportunity to participate in shows like BITEX in Bahrain or GITEX in Dubai where American technology is on display.

The United States places a strong emphasis on developing commerce in the Gulf region.  Already Bahrain and the United States have a strong trade and investment relationship, and this is augmented by the fact that our two countries have had a free trade agreement, or FTA, in place for the past twelve years, which eliminates tariffs on most products.

Between 2005 and 2016, trade between Bahrain and the United States has more than doubled, from $782 million in 2005, to $1.7 billion in 2016.  Not only has the FTA expanded bilateral trade, it has also created investment and good jobs for people in both of our countries.  The presence and growth of numerous U.S. ICT firms, their products and their services in Bahrain is a testament to the success of the FTA.

We would like to do more to promote trade and investment between our countries, and taking advantage of the FTA is one such way to do so.  We look forward to partnering with the Government of Bahrain, our chambers of commerce, the Economic Development Board, and U.S. and Bahraini companies to more fully take advantage of the FTA to promote even more commerce, prosperity, and jobs for our respective nations.

In closing, I wanted to underscore my belief that the Bahrain-U.S. bilateral economic relationship, which began more than 120 years ago, has never been stronger, and that U.S. ICT firms continue to play a critical part in it.  Thank you for your attention today, and wishing you the best for a successful and fruitful event.