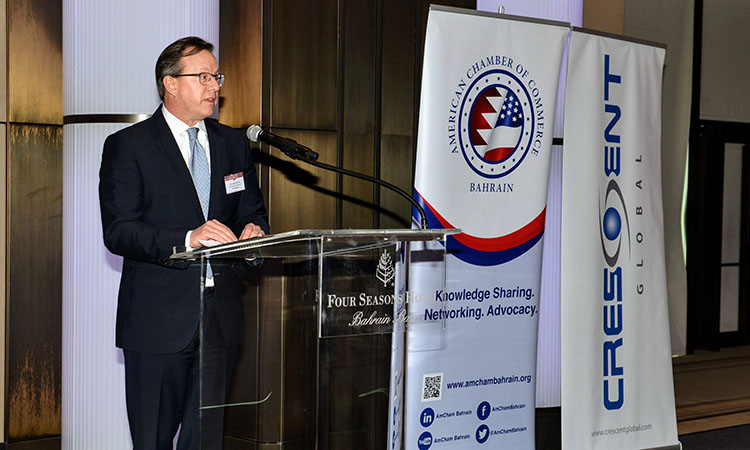 Ambassador’s Speech to the American Chamber of Commerce in Bahrain

Thank you, Qays for that warm welcome.  It is a great honor to join you and the members of the AmCham Board, along with your guests and friends at this luncheon.  Thank you also to Admiral Aquilino for being here.

For more than a decade, the Amcham has played a vital role in strengthening commercial relations between the United States and Bahrain, and I very much look forward to working closely with you in advancing that common objective still further.

And Qays, thank you, in particular, for your strong leadership, and for the hard work you and your colleagues on the Board and among the broader membership undertake to identify and expand opportunities for American and Bahraini business every day.

As has been noted, I arrived in Bahrain to begin my assignment as Ambassador only recently, in November.  The two months since then have really flown by, but it’s only in the past few days that I’ve truly begun to feel things settling in, and that’s because just earlier this week I returned from a short trip back to the States to retrieve my family, who are now also here in Manama with me.

I look forward to the opportunity to introduce my wife Arnie to you.  She is occupied right now with enrolling our three kids in school, among other obligations.  I can assure you, our little family will be doing our part to contribute to Bahrain’s commercial advancement and prosperity.

Administration’s Approach to the Gulf

It is a tremendous honor to serve as the American Ambassador to Bahrain.

The United States enjoys, as you all well know, an extremely strong and robust relationship with the government and people of this country.

That relationship has been built over many decades through cooperation in developing Bahrain’s energy resources and its heavy industry; through the U.S. Naval presence and the tremendous hospitality shown to America’s sailors and marines across the decades who have resided here; through the selfless commitment of the founders, doctors and nurses of the American Mission; and through the thousands of Bahraini graduates of American colleges and Universities, to name just a few examples.

And it is also built upon the commitment of our two nations’ political leadership, who have maintained the relationship through crises and triumphs in this vital, but periodically volatile region.

In my introductory meeting with His Majesty, King Hamad extolled the genuineness of the friendship that binds the Bahraini and American people and sets the foundation for everything we achieve together.  It will be my continuous objective as Ambassador to do right by our long history of friendship and strengthen these already deep bonds yet further.

And there is a real opportunity to do so, particularly through expanded commerce and business.  One has only to review the President’s remarks at Davos last week to appreciate the centrality of economic growth and renewed American prosperity to the agenda of the Trump administration.

America is open for business, as the President said to the Davos attendees.  The growth we are seeing in the American economy, and the very positive signs for inward investment and the repatriation of capital driven by changes to the corporate tax rate and the reduction of the regulatory burden upon companies operating in the United States, are going to create new opportunities and new alignments that will have positive impact globally, including in Bahrain, and we’ll want to exploit that.

President Trump has placed particular emphasis on developing our commercial ties with the Gulf region.  Last May, he chose Riyadh and meetings with the leaders of the Gulf states as the focus of his first visit outside the United States.  That was an important and not-accidental demonstration of the centrality of this region to the vision of the Administration.

In their May 23rd meeting in Riyadh, the President and the leaders of the GCC states agreed to strengthen economic relations in a variety of fields, including in trade and investment, energy, industry, technology, agriculture, transportation and infrastructure development, in line with the development visions adopted by the Gulf states themselves.

This commitment was on clear display this past November when His Royal Highness, Crown Prince Salman visited the United States and celebrated over $10 billion in new commercial projects awarded to U.S. firms.

These projects are to be found in Bahrain’s most vital and strategic economic sectors, including the BAPCO refinery modernization; the ALBA aluminum smelter expansion; Gulf Air’s acquisition of new commercial aircraft; and of course the purchase for the Royal Bahrain Air Force of advance F-16 fighter aircraft.

President Trump expressed his appreciation directly to the Crown Prince in their Oval Office meeting for Bahrain’s recognition of the expertise and quality brought to these projects by American firms.

One factor that stands out immediately in the U.S. – Bahrain commercial partnership is the presence of a bilateral free trade agreement.  I view the Embassy’s partnership with the Amcham as critical to identifying new ways to leverage the full potential of the U.S. – Bahrain FTA.  Since the FTA’s entry into effect 11 years ago, two-way trade has more than doubled, from 782 million dollars in 2005, to 1.7 billion dollars in 2016.

Bahraini and U.S. firms have benefitted greatly from the FTA.  I understand that Gulf Petrochemical Industries Company, or GPIC, exports roughly half its output to the United States.  Aluminum Bahrain; Gulf Aluminum Rolling Mill Company; and Midal Cables also export significant production to the United States, while U.S. manufacturers in all sectors export duty-free to Bahrain under the umbrella of the FTA.

U.S. manufacturers such as Mondelez, Coca Cola, and West Point Home, who have each established major production facilities in Bahrain and created good jobs here, are further testament to the positive environment for U.S. business in Bahrain and the benefits of the FTA.

Likewise, the presence and growth of numerous U.S. service providers in Bahrain provide further examples, including firms in the financial services sector like J.P. Morgan and Citibank; in Information Technology like Amazon Web Services and Avaya; in engineering and construction like AECOM, Jacobs Engineering, and Hill International;  and in consulting like Deloitte and Ernst &Young, among others.

Sectors in which U.S. Companies Could Expand Trade

We can be working together to promote opportunities in Bahrain’s high-growth sectors, such as in high-value manufacturing and industrial services, information technology, health care and medical equipment, construction and engineering, logistics, professional services, renewable energy, construction, and tourism.

In doing so, we should look to join forces where possible with the Bahrain Economic Development Board, whose target sectors for expanded development include financial services, manufacturing, logistics, tourism, IT, and associated startups.

By almost any measure, the FTA has been an extremely positive development in our bilateral relationship.  However, its fair also to acknowledge the disappointment caused in Bahrain by the 2016 expiration of tariff preference levels (TPLs) regarding textiles and garment exports to the U.S.   The TPL was designed to be a temporary, ten-year measure to facilitate the entry of Bahraini textile-manufactured products using foreign yarn inputs into the U.S. market.  It had a fixed ending date from the outset.

And while some companies did not take advantage of the ten-year period to adjust their sourcing, some like West Point Home did, and are flourishing.  There has been some confusion that expiration of the TPL is the expiration of the FTA itself.  That is absolutely not the case, and correcting such misunderstandings is definitely something we need to be doing together.

The power of the Bahrain-U.S. Free Trade Agreement – one of only two such agreements maintained by the U.S. government in the Gulf region – is that it establishes a strong framework for the growth of U.S. – Bahrain commercial ties, and I am committed to helping business leaders like you realize the full potential the FTA provides.

We are also blessed here in Bahrain to have partners in the Government who appreciate the value of expanded U.S. – Bahrain trade and who will work together with us toward that end.  I already mentioned His Royal Highness the Crown Prince’s personal commitment to this, and I’d also like to express appreciation for the efforts of Minister of Commerce and Industry Zayani, and head of the Economic Development Board Khalid Rumaihi, among many others, for their dynamic, results-oriented leadership.

In the spirit of working together to expand new commercial opportunities, today, in conjunction with AmCham’s Board of Directors, I am pleased to announce the launch of the third “Discover America Week” here in Bahrain.

“Discover America” festivities are a celebration of the depth and breadth of America’s commercial presence in Bahrain, and will take place February 10th through the 15th.  This year’s programming underscores the enduring presence of a number of U.S. companies and brands in Bahrain, as well as the incredible variety of new entrants into this market.

To highlight just some of the activities that will take place during the week  — we are planning a visit to West Point Home to celebrate this fantastic FTA success story.  Also, in partnership with AmCham, we will host a reception for alumni of U.S. universities and exchange programs.

Other events include a seminar on doing business in the United States and a celebration U.S. IT firms at the BITEX IT Show.  We will also visit U.S. retailers at City Center and at the Avenues Mall, and we will wrap the week up with some American barbecue and country music at Big Texas Barbecue and Waffle House.   (You’ll find me at the gym the entirety of the week following.)

There will be other activities and promotions ongoing and you will be able to find a complete schedule of events posted to the U.S. Embassy website by the end of this week.   I look forward to seeing you participate in many of these activities throughout the week!

On that theme of “Discovering America”, I do want to take a moment to highlight the important work performed by the Embassy’s consular section in facilitating travel and commerce between the United States and Bahrain.

Travel between our two countries is an indispensable pillar of building relations and promoting trade and investment.  Each year more than 5,000 Bahraini nationals come to our Embassy to apply for visas to tour, study, or conduct business in the United States.  We have recently taken steps to make that process even easier.

We have implemented an Interview Waiver Program, by which Bahraini citizens can renew visas within one year of expiration without even setting foot in our Embassy.  Standard checks are performed, and an application fee is still required, but no in-person interview is necessary in this program.

Secondly, for those who do need an interview, we have made staffing adjustments to ensure our visa applicants can get an appointment without delay, usually the next business day, which having worked in this region for many years, is highly unusual and very positive.

Consular services are one of the tangible items we can provide at the Embassy, and I definitely welcome your feedback on how we’re doing.

In closing, I would like to underscore my belief that the Bahrain-U.S. bilateral economic relationship has never been stronger nor offered greater opportunities for new growth.  Realizing those opportunities will take the work of all of us, together, and I am absolutely committed to partnering with you in that effort.

Thank you for your attention today, and look forward to getting to know each of you over the coming weeks and months.