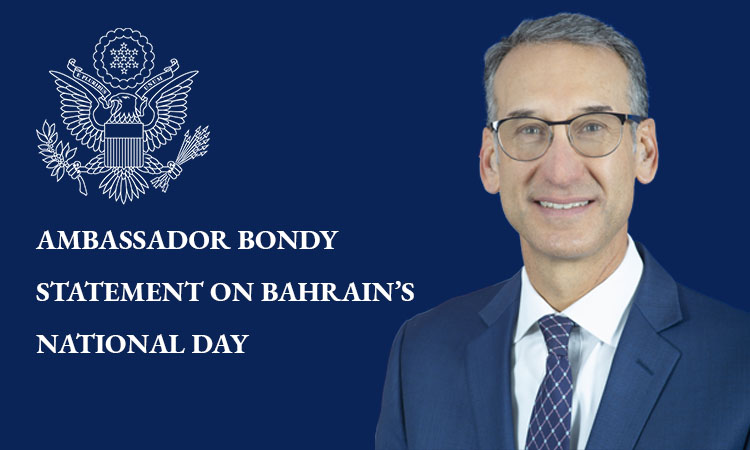 On behalf of the United States Embassy, I congratulate the government and people of the Kingdom of Bahrain as you commemorate the 51st anniversary of Bahrain’s independence and the Accession of His Majesty King Hamad bin Isa Al-Khalifa.

I would also like to extend my sincere congratulations on the opening of the first session of the sixth legislative term of the National Assembly.

The United States greatly values our longstanding relationship with Bahrain, and we thank His Majesty the King, and His Royal Highness Crown Prince and Prime Minister Salman bin Hamad Al Khalifa for their continued commitment to our historic and growing alliance.

This year, the Kingdom of Bahrain celebrates its independence after conducting peaceful and orderly legislative and municipal elections and forming a new government. We look forward to strengthening our partnership with the new government, and we wish the Council of Ministers and members of the National Assembly all success in their work on behalf of the people of Bahrain.

The United States and Bahrain have a deep and broad bilateral relationship covering a wide array of common interests and values, from national and regional security, to trade and investment, to fundamental freedoms. The firm foundation of the relationship is the historic people-to-people connection; we are partners, we are allies, and we are friends. A secure, stable, and prosperous Bahrain is in the national interest of the United States.

The United States Embassy looks forward to expanding our close partnership and working with you for peace and prosperity. Happy National Day, Bahrain!