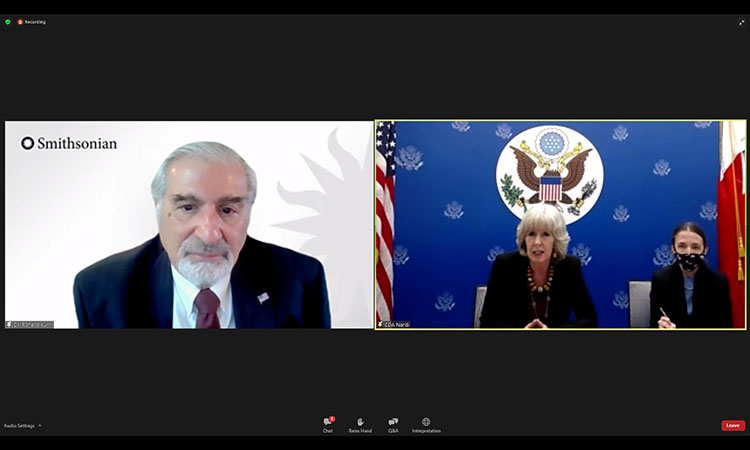 On October 28, the Antiquities Coalition, in collaboration with the Bahrain Authority for Culture and Antiquities and the U.S. Department of State and Embassy of the U.S. to the Kingdom of Bahrain, held a webinar titled “Strengthening Bilateral Ties in the Fight Against the Illicit Trade in Cultural Property”. This public session was preceded by a closed working session between the different parties on August 11, 2021. The panel discussion was introduced by Dr. Tess Davis, the Executive Director for the Antiquities Coalition and featured Her Excellency Shaikha Mai bint Mohammed Al Khalifa, President of the Bahrain Authority for Culture and Antiquities, Mr. Matthew Lussenhop, Acting Assistant Secretary of the U.S. Department of State’s Bureau of Education and Cultural Affairs, Dr. Richard Kurin, Smithsonian Institution Distinguished Scholar and Ambassador-at-Large, Dr. Mounir Bouchenaki, Advisor to the Arab Regional Center for World Heritage in Manama and Mrs. Maggie Nardi, Chargé d’Affaires at the U.S. Embassy to the Kingdom of Bahrain.

Moderated by Dr. Kurin, the discussion underlined the central role of cultural leadership in enhancing global security, domestic economies and foreign diplomacy and elaborated on the dangers of illicit trafficking in cultural properties and associated terrorist activities. The key speakers highlighted the growing challenges, especially during the pandemic, and shared their countries’ perspectives and efforts in the field. During her intervention, Her Excellency Shaikha Mai bint Mohammed Al Khalifa expressed her gratitude to the Department of State and the Antiquities Coalition for organizing this seminal initiative at this time when illicit traffic is booming in the region. She stated that although the Kingdom of Bahrain is not active in illicit trafficking of cultural property, Bahrain is committed to heritage preservation and can play a significant role in controlling frontiers and combating illegal traffic with the support of the United States.  She added that Bahrain ratified the 1970 UNESCO Convention on the means of prohibiting and preventing the illicit import, export, and transfer of ownership of cultural property in 2014. Her Excellency’s remarks highlighted the significance of Bahrain’s millennia-old heritage and the efforts towards its protection including the building of a sustainable cultural infrastructure, the inscription of 3 Bahrain sites on the list of UNESCO World Heritage and the opening of a UNESCO World Heritage Centre in Manama. Almost four decades after the opening of the Bahrain National Museum, considered at the time one of the first of its kind in the region, Bahrain continues to invest in heritage preservation, conservation, and promotion. Namely, HE Shaikha Mai’s launching of the Investing in Culture initiative has been a very successive collaboration between the private and public sector and resulted in raising awareness to the significance of local heritage and its protection. She also noted the instrumental role of the Arab Regional Centre in providing support in heritage preservation to Arab countries since 2012 and equally played an instrumental role in providing training to Bahrainis and young professional in the region.

As the floor was given to Mr. Matthew Lussenhop, the Assistance Undersecretary elaborated on the role of the United States in combating illicit traffic in cultural property and the repatriation of artifacts, noting that the US authorities have successfully facilitated the return of around 20,000 cultural objects to 45 countries. This endeavor requires building strong partnerships with different countries around the world and a close collaboration between private and public entities to ensure a sustainable development. He equally discussed the current challenges especially considering the global pandemic which has seriously impacted the work of  agencies on all levels, which resulted in a resurgence of illicit activities and the rise of e-commerce which has also allowed for the creation of a new market for the trade of looted cultural property.

Dr. Mounir Bouchenaki stated that the Kingdom of Bahrain is committed to raising awareness about the illegal trade in antiquities through intensive training of legitimate artifact dealers and customs personnel, in addition to encouraging the protection of cultural property. Bouchenaki also emphasized the importance of collaborating with educational and cultural institutions.

For her part, Mrs. Nardi thanked the Bahrain Authority for Culture and Antiquities, the Antiquities Coalition and the U.S. Department of State for their collaborative efforts to strengthen the fight against illicit trafficking in cultural property and announced the signing of the “Manama Cooperation Document 2021” which sets the framework for joint action in the future in order to combat illicit trafficking in cultural property and ensuing illegal activities. The document includes an affirmation from the United States of America and the Kingdom of Bahrain on the important role they play in combating the illegal trade in cultural property while also recognizing the importance of cultural exchange and fair-trade practices. The joint statement includes the commitment of both countries to work together through exchange of information and expertise.

The joint statement was posted online.